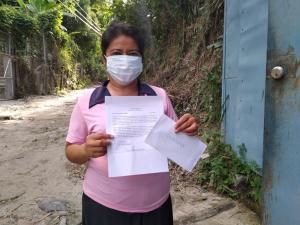 Solidarity and trust are the values that donors who contributed to the COVID Relief and Recovery Fund for Family showed us last April. Through this campaign, we raised $28,030.99, to exclusively alleviate the most pressing needs that our participants are experiencing due to the COVID-19 crisis.

For most families, their main source of income comes from informal jobs or a small business where they often earn less than minimum wage,   which is approximately $300.00 per month in El Salvador. For our entrepreneurs in our Women’s Empowerment Project, most were forced to close their businesses immediately. In the span of a few days, most entrepreneurs stopped earning any income altogether. In addition, many reported one or more people in their household lost their job due to other businesses closing.

The situation for families at the Child Development Center was similar. For many, it seemed impossible to pay their child’s tuition which is $18.00/mo for more than half of the 75 families.  Prior to paying the tuition bill, they had to prioritize buying food, paying rent and utility bills, as those are the basic needs.

And, despite the government putting a three-month moratorium on all bills, families wondered how they would pay the accumulated bills when the moratorium expired. In light of all this, Programa Velasco started the COVID-19 Relief and Recovery Fund for Families.

Thanks to your generosity, in one week we managed to raise $7,835.35. These funds were immediately distributed to the entrepreneurs in San Ramón and Tepecoyo, as well as to the families of the Center. The funds were delivered in different ways to each group.

Current entrepreneurs in the Women’s Empowerment Project and graduates in our mentorship program, Clan of Virtues received two cash disbursements.

Staff conducted a survey to understand the economic and social situations the entrepreneurs and their families were facing. With that information, the staff could determine the amount of cash support for each entrepreneur. After the survey, staff distributed amounts, ranging from $75 to $150, depending on the entrepreneurs’ unique situation.

The whole PV staff supported the endeavor by making bank transfers, delivering the cash contribution in person, or coordinating a way to get the entrepreneur the money.

The Center’s staff also spoke to the families about their unique situations and depending on the families’ needs, they also received a cash disbursement between $75 and $150 to buy food, pay rent, or cover household bills.

Thus far in San Ramon and La Javia, we have distributed the funds to:

With the pandemic still raging on and with many entrepreneurs and families still out of work or not earning enough money to cover their basic needs, we are preparing for another cash disbursement before the end of the year. We’ll be in touch with how the rest of these funds will be distributed.

Our participants greatly and sincerely appreciate the support. As many of them expressed, it came at the best time. Simply knowing that someone was thinking of them, made them feel that they were not alone and that someone was there to listen and support them.

We thank everyone who made a donation for this emergency fund once again. It was the first time that Programa Velasco had raised funds for direct humanitarian relief always, the response was beyond what we imagined. You can be sure that your contribution was used in the best way by our participants.