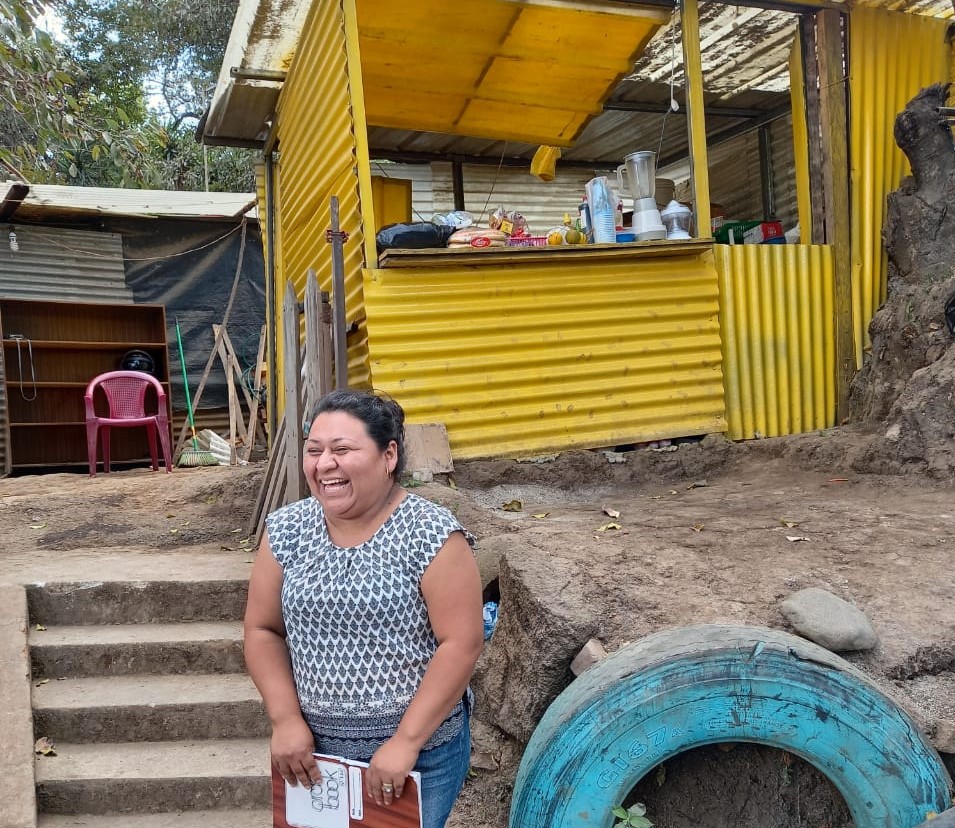 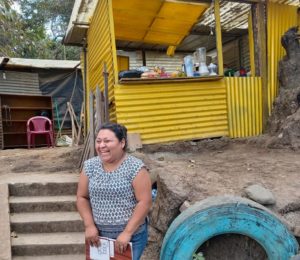 Breaking the Bias: “There’s no way a woman can work and give her family the love and attention they need. It’s not possible.”

“She should always choose their family” This is something that Salvadoran women hear during their lives. In the Women’s Empowerment Project (WEP) we have the opportunity to witness how many women prove this wrong.

One of these women is Veronica, back in January 2021 who during a visit from the WEP staff, Veronica stated how “When a woman sets her mind to something, she is able to achieve it.” Currently, Veronica sells fast food in a “Chalet” at the entrance of her neighborhood, which she built with her own hands.

Prior to participating in WEP, Veronica engaged in different activities to generate income. Specifically, she would sell pupusas as well as make and sell soft drinks, and occasionally make chicken tamales. In addition, she worked as an assistant in a chalet in Tepecoyo selling fast food.

Within the community, Veronica is well-known for being very involved and supporting others, as she is part of various community committees. When there is an emergency, she is one of the first people to respond and is deemed to be an excellent neighbor. She was even elected almost unanimously as president of the WEP savings and lending group by her peers.

In addition to these responsibilities, Veronica takes care of her family and completes all household chores. She lives at home with her partner and two children, one fourteen year old and another who is six years old. For years, her eldest son’s education has been affected by health problems that make him unable to attend class. Veronica tried homeschooling him but felt she didn’t have the patience to do it and realized it only hurt their relationship.

This situation made her upset and could not understand how she could be so helpful in her community yet the relationships at home were so difficult.

All of this was happening in V’s life when she started at WEP. As she began attending workshops and discovering things about her business and personal life, she discovered needs she had not realized she had. In regards to her business, she decided that she wanted it to scale. In order to do so, she would need to invest money and time into building a physical space where she could cook and sell fast food. She would also need a refrigerator and a blender to make and store the products.

Furthermore, Veronica discovered that she wanted to improve her relationship with her sons and husband to be “a better mother” and wife. It took us by surprise that, unlike the other participants who waited for the mental health clinic to be built to start counseling sessions, she asked to start as soon as possible and wherever she could. Her reasoning was that the personal empowerment workshops “left her with a lot to think about.”

After a year in the WEP, Veronica experienced major changes in her life.

With much grit, saving, lending, and paying with interest in the self-savings and lending group, V, has managed to increase her working capital and because of her excellent participation in the Project, she was able to access seed money that allowed her to purchase the equipment she needed.

For months, she has worked hard in her sessions with Gloria, the clinical psychologist. She describes how the experience has made a major impact on her life.

“Before I was afraid to give and receive love. Now I am a better mom, more loving and understanding.” She shares how her husband has told her that he sees her calmer and that makes her happy. Before, everyone always told her that she seemed angry all the time and that didn’t make her feel good at all.

Veronica continued with the idea of building her “chalet.” Thanks to the support of her father who gave her a physical space, she and her husband were able to build her workplace. Now, she is already cooking and selling there. She went from selling a maximum of $18 a day to being able to generate an income of $60 a day when she sells pupusas.

Veronica is proud of all that she has achieved in her first year at WEP. She knows that she still has a long way to go, but as she said, she is able to achieve anything she sets her mind to.

If you want to support more women like Veronica to have access to these opportunities, sponsor a woman entrepreneur today and create an invaluable impact in her life.